Work of RCC Faculty, Students to be Featured in Boston Lyric Opera's The Fall of the House of Usher 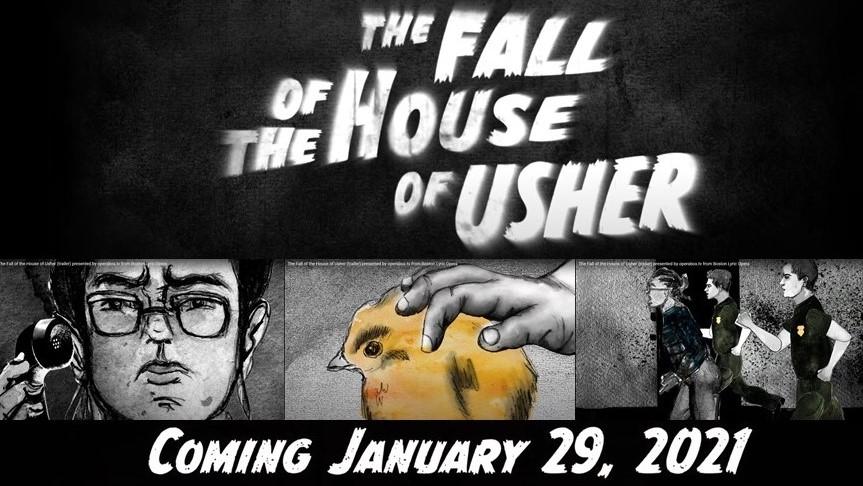 Riverside City College will be represented in the upcoming Boston Lyric Opera's newly commissioned film version of Philip Glass' opera, The Fall of the House of Usher. The opera is a gripping, groundbreaking creation that launches Edgar Allan Poe’s Victorian, a gothic horror tale into modern times.

The cast includes two members of the College faculty, Professor of Art Will Kim is the film’s lead animator and Associate Professor Jian Lee is the character animator. RCC student Alexis Magana is an assistant animator.

"This was an amazing opportunity to contribute my art and animation to a meaningful film that shows our current immigration crisis, expressed in a poetic way,” Kim said. “Animation is moving painting and visual poetry. My philosophy and tendency were met well with Director James Darrah's intention.”

A planned live performance production, scheduled to be performed at Boston Lyric Opera, has instead been converted to a film production, due to the pandemic. Using hand-drawn and stop-motion animation techniques alongside curated archival footage, and Glass' complete score and Arthur Yorinks' full libretto, while building a new, cinematic framework.

Screenwriter Raúl Santos leaned into the ambiguities of Poe’s original story and Yorinks’ libretto, dropping the opera’s main story into an unexpected contemporary context. The mysterious Usher twins, William, and the cursed house itself, are fantastical figments in the imagination of Luna, a mute immigrant child held in a detention facility at the border between the United States and Mexico.

A diverse team of animators and artists -- many of whom have their own remarkable immigration stories, realized the film’s dreamlike immediacy. All of the leading artists on the project are first-generation immigrants or are from immigrant families.

“This made it more meaningful to participate in the film about different sides of immigration in the U.S.,” Kim, a son of immigrant parents, said. “I was able to emotionally connect to the shots I animated, on a personal level.”

Kim spent most of his childhood in Korea.

“This is an unusual creative time for Boston Lyric Opera,” says Esther Nelson, BLO’s Stanford Calderwood General and Artistic Director. “This pandemic has demonstrated how inventive artists respond with ingenuity to a crisis.”

Most of the artists and filmmakers for this film, including Kim and Lee, worked on the film remotely during the pandemic. Kim was intrigued by how a live performance/opera production turned into a cinematic experience, allowing animators and artists to participate in the film from across the globe.

“Perhaps this can lead visual artists and animators to expand their field of practice outside of their typical areas,” Kim added.” I have animated a backdrop for a concert stage before, but I have never animated for an Opera film, meant to be a live performance.”

The Fall of the House of Usher debuts on BLO’s operabox.tv streaming service, starting Friday, January 29. The film trailer can be view here.